After a hiatus, I’m back to doing lots of things with FluidDB.

One of the things is building a service to visualize some of the data in FluidDB. For example: try this link a modern browser:

You should have soeen something that looks similar (but perhaps not identical) to the image below:

It should be similar to the one below, but different in these respects:

When I say you need a modern browser, what I really mean is that it doesn’t work in Internet Explorer; I suspect it won’t even work in Internet Explorer 9. The reason for this is that the image will be in SVG (scalable vector graphics), served as XHTML, which is not supported by any version of Internet Explorer, though all recent versions of Firefox, Chrome, Safari and Opera (including mobile version) are just fine. Although Internet Explorer 9 does supposedly support SVG, I believe it still won’t supprt XHTML, so this will continue not to work. (I’d go to HTML5, but it isn’t ready for this either.)

Effectively, what I’ve built, is a web service that will draw a picture of any object in FluidDB. You can specify the object using its about tag or its object ID, and there are two styles of drawings. The one above is what I call the “Butterfly” style. There’s also a “daisy” style, exemplified by the image below, which you can get to (live) by clicking on this link: 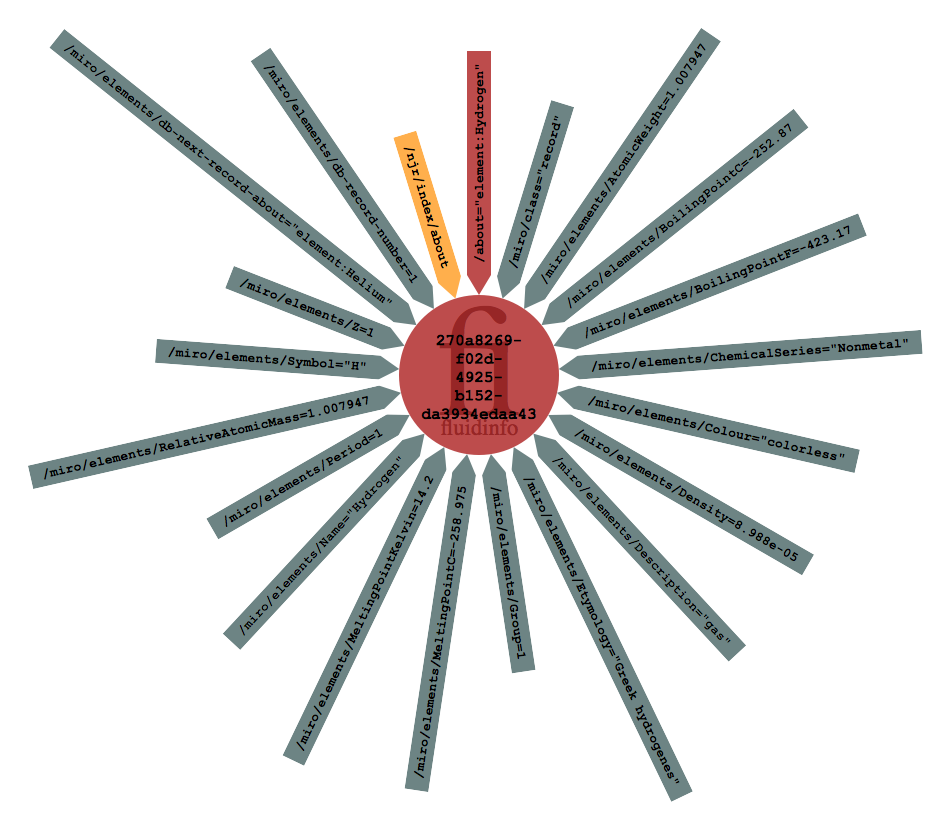 Again, in the live version, the link to Helium works.

At the moment, the only interface is the address bar in your browser. When drawing an image, you have three choices to make:

We’ll take Alice In Wonderland as an example and show the eight variations.

The about tag for the book Alice’s Adventures in Wonderland, by Lewis Carroll, is book:alices adventures in wonderland (lewis carroll). (See http://abouttag.blogspot.com/2010/03/how-to-tag-books-in-fluiddb.html and http://abouttag.blogspot.com/2010/03/perfect-about-tag-books-in-fluiddb.html for a description of conventions for about tags for books in FluidDB.) And its object has ID 03c8ce35-aa5e-4b58-b3ab-ddda55642b15.

The four options for producing HTML are:

(You can entitize the book title if you like, but it works in most cases without. Having said that, my blogging system screwed up without them, so the actual links are entitized here.)

The first and third look like this (at the time of blogging).

The four options for producing the raw SVG, are as follows:

The code seems to be reasonably reliable, but there a few things to note. Specifically:

I suppose the one other thing is the hyperlinking. Klee and Miró, which are the bits of software doing the drawing, try to spot things that they think are hyperlinks and put them in. This seems to work OK, but the algorithms are approximate and may get it wrong occasionally.

If you play, let me know what you think. Of course, lots more bells and whistle can, and probably will, be added. And with incredible speed, Pierre André has already added it to FDBExplorer (http://fluiddbexplorer.appspot.com), from where you can pop up a visualization in a window.

Final note: There is another part to the app. If you just go to the front page (http://abouttag.appspot.com), you will see a form that you can type a title and author into to find the recommended about tag for that book. Unfortunately, Google has changed something and this doesn’t work if you’re not logged in, but if you have a Google account, you can log in with it (Google handles the authentication for all apps on appspot.com, which is a Google domain). It will remember all the books you put in.

The point of the system is to do the standardization of form so that it’s more likely different people will record information on the same object. For more details of that, see the article on the abouttag library at http://abouttag.blogspot.com/2010/03/about-tag-conventions-in-fluiddb.html.

A few more conventions have emerged, which I will add to that list, but it’s still somewhat useful.