A Simpler Interface to Fluidinfo Permissions¶

I’ve previously blogged at a high level about the marvel that is Fluidinfo’s permissions system (Permissions Worth Getting Excited About and The Permissions Sketch) and more recently went into some more detail (Permissions in Fluidinfo) and proposed a conceptual simplification.

For me, however, a key question remains: what is a reasonable way for a user to inspect, understand and modify those permissions?

At first glance, if we compare Fluidinfo’s permissions system to that of the Unix file system [1], it looks vastly more complicated, suggesting that me might need a completely different model. In fact, it looks very similar to the permission system on VMS, for those who remember it, which—like Fluidinfo—implemented full access-control lists (ACLs).

If we think of a Fluidinfo namespace as being like a directory (which it is) and a tag (an abstract tag, if you prefer) as being like a file, then this is how the two permissions systems line up:

So how of the difference is essential, and how much presentational?

If we don’t worry too much about Unix groups and Fluidinfo exception lists (other than when they contain the owner) we can express Fluidinfo permissions in a way that aligns perfectly with familiar unix permissions. For a tag, it turns out that Fludinfo’s default permissions are:

and for namspaces (cf. directories), they are:

It will not have escaped your attention that these are Strikingly similar to those in the Unix case. (I am sorely tempted to use d to indicate a namespace, since namespaces are directories in all but name, but I’ve baited Terry enough recently.)

So all that leaves is Unix groups and Fluidinfo exception lists.

Until I started thinking carefully about Fluidinfo permissions, I had always thought that Unix groups were simpler and markedly less powerful than the sort of full access-control lists offered by the like of VMS (and Fluidinfo). I now believe the difference to be much smaller than I had believed.

Here’s the thing: a unix group is a set of users. Each file is associated with a single group (by default, a group containing all users). But each unix user can be a member of multiple groups.

So if we’re prepared to create enough groups, we can effectively implement something very close to full ACLs using groups. If we want to allow Alice, Bjørn and Cécile to access a file foo on Unix, we can create a group (perhaps called alice+bjørn+cécile) containing them, move the file into that group, and then use the group permissions to allow the access that we want.

With this realization, it seems that the level of control available with groups is almost exactly the same as with “full” ACLs.

From an ACL perspective, a group is just a shorthand for a named group of users for use with ACLs.

From a group perspective, an ACL is just a dynamic group.

The only significant difference is that ACls allow us to use a different group for different permissions on the same file or directory: so we could allow one group of users read access and another group write access, while denying both to the world. Although this is not an unimaginable case, it’s probably fairly rare.

With this perspective, we can now map the final part of Fluidinfo permissions onto a Unix-like permissions string. First let’s take the case where I’ve allowed Alice to write my rating tag.

Now let’s take the case where I’ve removed read permission from the world for my friends namespace but but allowed it for a group consisting of Alice,Bjørn and Cécile:

“Ah,” you say, “but what if I want to know who is in the group?” Well, what does Unix do? It gives us a -g option on ls to list the group that the file is in. So if we take the idea of dynamic groups, we would have the following:

So the mapping is essentially complete. There are corner cases—primarily the one discussed above, where full ACLs allow different groups for read and write permissions—but I’m sure this will cover the vast bulk of real-world cases. This is what we have ended up with. 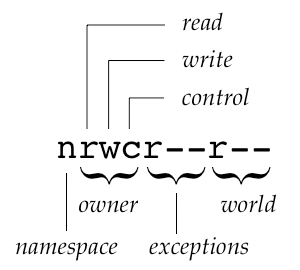 If the full detail were really needed, I would be tempted to have a -L flag to expand the write permissions (and conceivably the control permission) to use the names in the alternative naming scheme I proposed in the last post. Again, I reproduce the key table here: 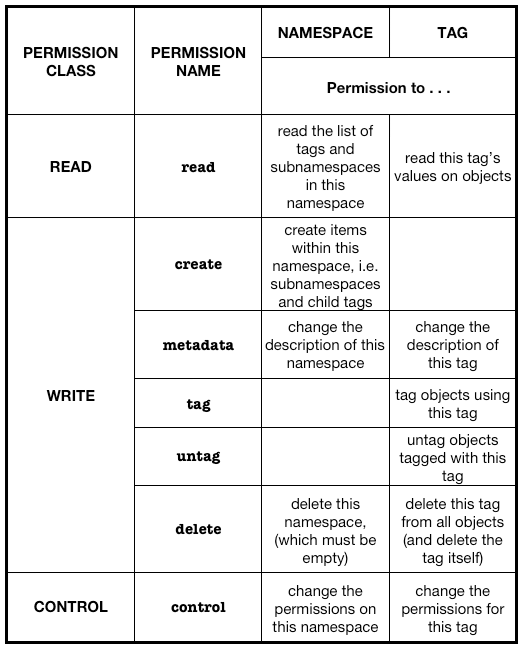 So if (for reasons I find hard to imagine) I’d allowed Alice, Bjórn and Cécile to tag and untag objects with my njr/friends/phone tag, but not to delete the tag itself (the abstract tag and all its occurrences) or to change its description, then we might get this:

where I would expand only permissions where a simple r or w would not be accurate and have added some spaces to make the user groups stand out more clearly. If the exception lists were different for different permissions, I’d probably give up and actually show the Fluidinfo style permissions.

I hope I’ve convinced you in this post that mapping full Fluidinfo ACLs to a Unix-style reporting system for permissions is not nearly such a hopeless task as it might first appear.

The reason I want to do this is not because Unix is the be-all and end-all in user interfaces (!), but because it is familiar (at least to many) and proven and has conventions that I think will make it much easier for people to understand what’s going on. It also suggests a way forward on setting permissions.

The next thing I plan to add to fdb is an ls (list sorted) command exactly as described above. In fact, most of it is already implemented (thought not yet pushed to GitHub).

After that (not implemented) I plan to add the equivalent of chmod and chgrp for setting permissions and changing groups (exception lists) respectively.

I haven’t really thought through what these should be called or what their syntaxes should be, but the cases I most care about supporting easily are the ones that I think will be common. I will probably just support numeric specifications (explained below) at first, and then add the g-r-style modifiers later if anyone demands them. (Personally, I never use them.) Key examples would include:

If I can think of some reasonable shorthands with less intimidating commands, I might make those available too. Perhaps something like:

Setting and Changing Permissions with FDB